As the cole crops finish up, the summer crops are just starting to produce.  So far the weather has been splendid for growing vegetables - timely rains followed by sunny days. 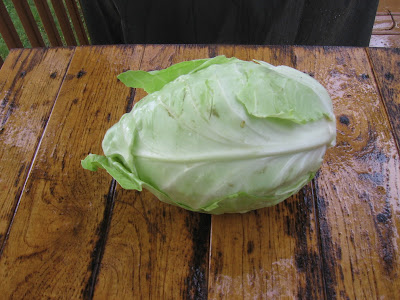 Last week I picked the first batch of Vertina pickling cucumbers, 3 3/4 pounds of them. 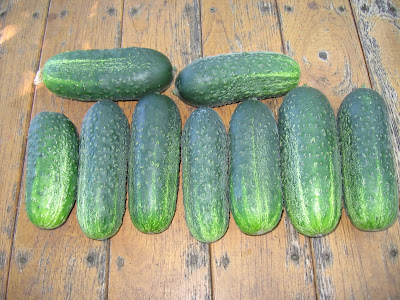 The same day they were turned into refrigerator pickles.  At this point, half of a quart jar is gone.  I had forgotten just how fresh and crispy these pickles are. 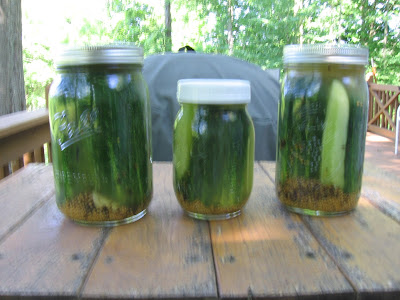 The Vertina cucumbers are smaller than the Calypso that I grew in past years.  The larger ones fit nicely into a wide-mouth quart jar, which are a bit shorter than the normal quart jar from Ball.  The smaller cucumbers will fit into a pint jar, which will be useful for canning.

Yesterday I picked a few more cucumbers, which were again pickled.  The bottle of Leinenkugel Summer Shandy is there to help the reader gauge the size of the cucumbers. 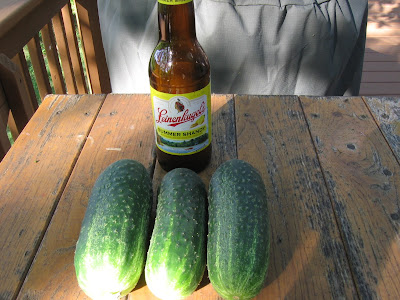 This is the first zucchini of the season.  It's a mystery zucchini, as the packet from Burpee's says it is an Italian heirloom with a picture that looks like Cocozelle squash.  It's obviously not that, but a modern F1 hybrid.  Anyway it's a pretty good squash so I grow it. This one did not develop at the flower end, poor pollination perhaps. 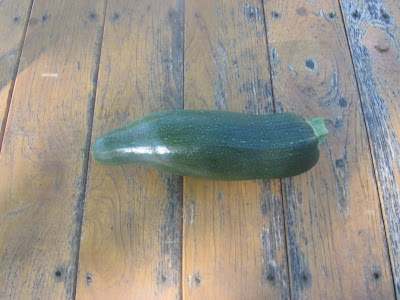 It was time for the garlic to come out.   The aforementioned squash plant was covering most of it. 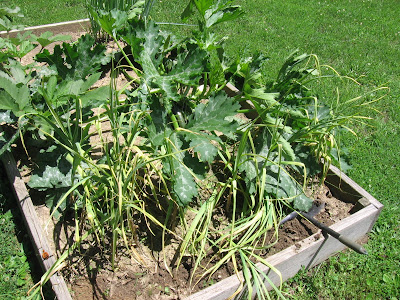 There were 4 kinds of garlic in 4 rows.  I bought the buds last fall at the Garlic Fest in Bloomington, which is basically an excuse to have music, food and beer at a park.  But there actually is a local grower who sells garlic there.  There's Lorz Italian and Red Toch.  Another kind I wrote down as 'La Hontian' when I bought it, from what I could make of my handwriting, but can't find it anywhere on Google.  The fourth garlic is a mystery garlic since the name tag is missing at the end of the row.  The 'La Hontian' appears to have done the best, followed by the mystery garlic. 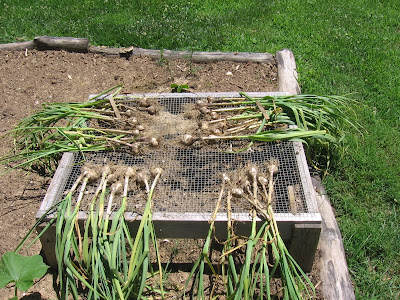 To see what other gardeners are harvesting this week, head on over to Our Happy Acres.
Posted by gardenvariety-hoosier at 9:17 AM

Boy, those are nice looking picklers. You can really judge their size up against a beer bottle, but really, Shandy?? Nice job on the garlic, too. Looks like you have plenty for the coming year.

Those are some lovely picklers, nice and clean and uniform. So far I have sliced mine for refrigerator pickles, but I will have to try some whole ones or spears next. Like you say, the Vertina and the Excelsior I grow are just the right size to fit in a jar.

I am growing the Tetsukabuto squash you grew last year, and so far it is growing like gangbusters. I am training it up a trellis, and I am hoping it will be sturdy enough given the size of the vines!

Your cucumbers are glorious. We have a real problem with cucumber beetles in my garden, so I'm a bit envious.

Look at that gigantic head of cabbage, so great. And your cucumbers are incredibly prolific. My cucumber plants are tiny sad creatures. But your garlic looks incredible.

Fridge pickles are just so moreish aren't they? Just as well you have several jarsful, and no doubt more to come!