As the saying goes, I’m a day late and a dollar short for the weekly totals.  But the relative (for me) yields are impressive, so here goes:


The brocolli was the last of the Major variety, and it was, as they say, a doozy. Previous heads were about ¾ pound, this head was twice as large as any before. After this I switched from Major to Gypsy, a more heat tolerant variety, or so they say. Something I just noticed about this variety is that the leaves are incredibly blue 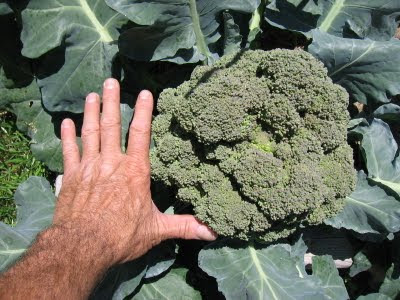 The Sunburst pattypan squash plant is going nuts.  I picked another five pounds this morning, which goes into next weeks tally, and gave away most of them to the food bank.  The foliage is so thick I have to push apart the leaves to find the squash. 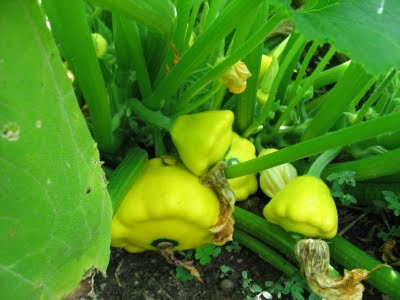 Winter squash is doing really well too.  There’s an acorn and a butternut in this bed.  Last year wasn’t very good for squash but it looks like this year will be very good.  I really can’t define any real difference in the weather that is responsible.  The trellis is shared with State ½ Runner beans, which are not supposed to get over three feet high.  Right.  Mixing the squash with bean may not be a great idea.   It’s gone to be hard to find the beans in all the foliage. 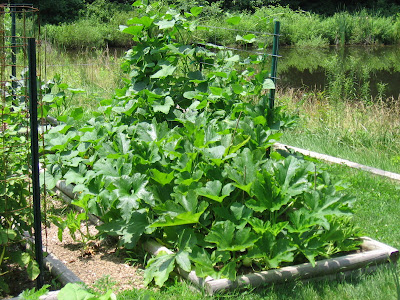 Here’s a pic of one of the butternuts that is getting to size: 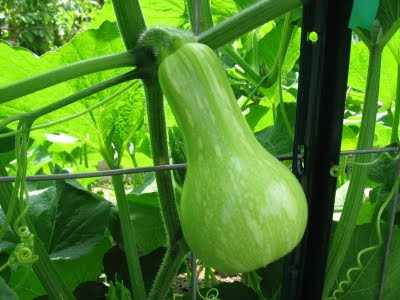 I wish I knew what’s going on with the cucumber.   I planted two kinds, Diva and a Burpee’s variety.  After getting two very early cukes from the Burpee’s plant I decided to remove it.  One reason I removed the Burpee’s plant is because it looked more stressed from pathogens while the Diva has been healthy in the past.   The Diva plant got the wilt this weekend and looks like it is done for.   I was seeing a few squash bugs on the Diva.  They vector a lot of diseases and I always associate squash bugs with a host of other problems.  Last year was a cucumber deluge.  This year it looks like I’ll get nothing. 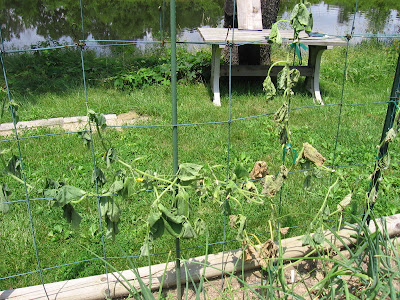 Also one very large bok choi, a green stemmed variety from Johnny’s called Black Summer.  I donated that one too.  I haven't had time to catch any catfish lately.  Since there was some interest in harvesting these fish, I'll put in some pics in a few days of the next fish that's caught.
OK I've tried to edit the font and spacing on this post for the last 30 minutes and this is the best I can do.  I'll have to quit while I'm ahead.  You win blogger!
Posted by gardenvariety-hoosier at 6:48 PM

Nice broccoli! My cucs have been covered with blooms for weeks, but there is only one deformed cuc on the vines. I had to plant seed twice to get these to even come up. I don't understand it.

Blogger has definitely been doing strange things lately. I apparently just lost the comment I made and am now having to type another.

That broccoli head is nothing short of amazing. Getting really good sized central heads like that is pretty impressive. Well done!

Oh I love your broccoli...I've been growing some monsters this year, too...but I think this one is the biggest I've ever seen!

Wow, spectacular broccoli! Enjoy. Sorry about your cukes. I've got cucumber beetles and saw a couple of the dreaded squash bugs yesterday, sigh.

Wow that is one nice head of broccoli. I've yet to grow a really good one. Some year I want to break the pound mark, but it seems half a pound is all I can do. Next year I'm going to try some other varieties that are known for being large.