OK  it was a failed experiment.  But not every experiment can succeed.  I tried planting ½ runner beans along with the butternut squash, thinking they could both share the same trellis.  Well at first the squash went crazy and spread its large leaves all over the place.  How could the beans have a chance, I thought.  But a funny thing happened.  The beans started growing all over the squash and it wasn’t long and they were king of the hill.


So I had to make a choice.  There are beans in several  beds.  I’ve already lost the acorn and pattypan squash and the Diva cucumber to bacterial wilt.  Somehow the butternut just keeps on chugging along, but why stress it?  It has six nice sized ripening squash but hasn’t done much lately.  The beans had to go.   There's too much foliage there which restricts the flow of air.   And dead air is an invitation to pathogens.

So out the beans went.  I cut the stems off at the base and pulled the vines out.  The last few days the butternut has put out a few new female flowers with the little squash behind them, and now the leaves will get full sunlight for photosynthesis.  I think of the leaves as green sugar factories that operate when they get sunlight.   It looks much better. 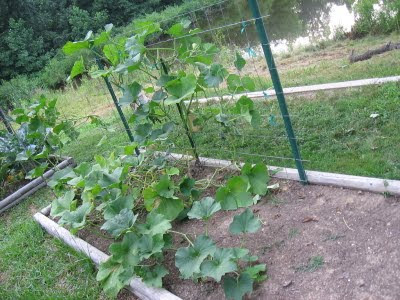 The Brandywine tomato plant is loaded with tomaters.  The one pounder that I picked a few days ago, the first big slicer this year,  was ripe enough to eat.  I couldn’t help it, I ate that thing in one sitting.  Just salt and pepper and was it ever good.   I had to put in a cross support in the cages to support these two whoppers. 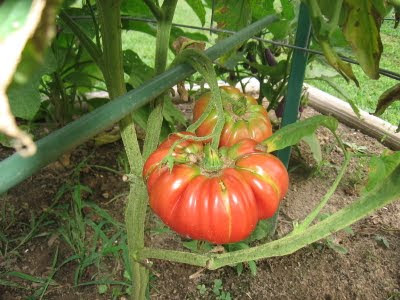 And here’s the same plant a little higher.  I’m not bragging just showing off. 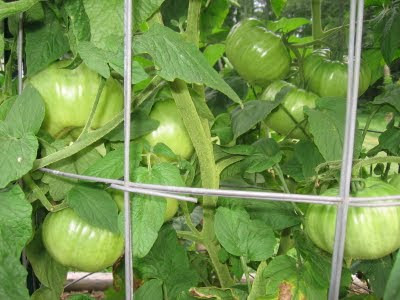 The marconi peppers are thick.  I had to put stakes all around it to support it.  Looks like a good year for peppers, with the heat.  This is a great pepper for grilling, but I like 'em red. 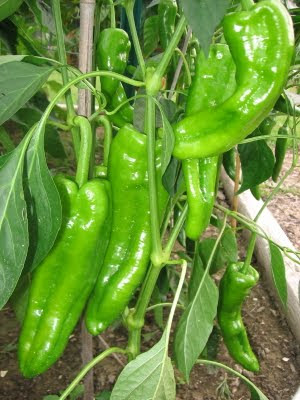 Posted by gardenvariety-hoosier at 9:19 PM

I am so ready for tomatoes. I have some green ones, but nothing ripening yet.... and hardly any peppers yet, either. :-(

I would have done the same with the squash. You probably still have time to plant more beans somewhere, but butternut squash on a cold winters' day, mmm mmm good.

Great looking peppers! I hope your squash continues to do well. That picture of the deck is fantastic! What a place to sit and relax and drink in all the nature. It's beautiful!