Every day I check on the tomatoes to look for the first blush of red.  Quite a few tomatoes are full size and have turned a pale green that is one step away from edibility.  The tomato plant on the left is a German Queen, and a Pink Brandywine is on the right, both heirlooms and new varieties for me.  They are very healthy, the Brandywine is six feet high and growing.  On Saturday my sister visited from out of town and I gave her a green tomato of each variety. 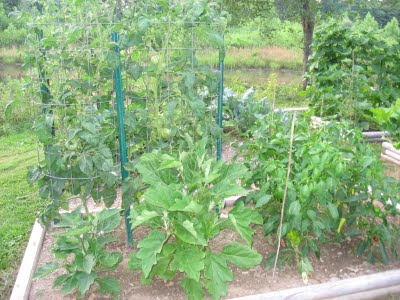 In front of the tomatoes, the Fairy Tale eggplant on the left is way behind  the Lavendar Touch eggplant on the right.  I’m now getting a steady supply of Hungarian Wax peppers and it looks like some Red Hot Cherry peppers are just about ready.  Can’t wait to find out just how hot they are.  The paprika peppers are impressive this year, but still green.


The Sunburst pattypan squash gave me just one squash this week after producing more than twenty pounds over the last three weeks. Many of the leaves were turning yellow and dying, but there was also a lot of green new growth. It looks to me like the plant completed a cycle and the dying leaves were no longer making energy for the plant. The dying foliage was hindering air circulation and harboring squash bugs. It was time for the vorpal blade to go snickersnack, and about 2/3 of the folage went into the compost bin. If the sprayings of Bt stopped the vine borer, then the plant should have a second life and make more squash. If it’s got the borer, well it’s all over anyhow in a week or so. At least the squash bugs have fewer places to hide now. 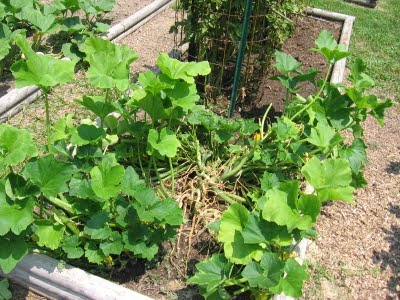 The Yukon Gold potatoes looked like they were done for – no new growth and most of the foliage yellow.  So out they went and I managed to dig up the spuds without spearing any potatoes with the fork.  Planting the Yukon Golds in front of the cages with the Red Pontiacs was a mistake, bad for both varieties because air movement and sunlight were restricted.   It looks like the Red Pontiacs do the best in these beds, maybe it’s the alkaline soil here that makes potatoes a challenge.  But I got a nice haul of Yukon Golds from six seed pieces, considering how early they came out. 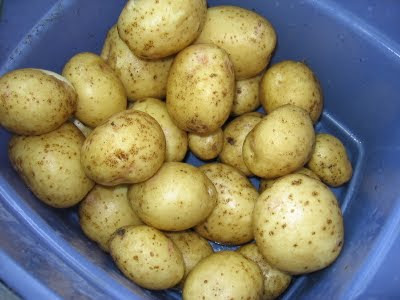 Can’t forget the brassicas, and how annoying it is when Microsoft Word changes the spelling to “basics”.   Cabbage crops did the heavy lifting in late spring/early summer and they are still producing.  In the back of the bed are two Gypsy broccoli, a heat tolerant variety that has replaced Major, and one is nearly ready to pick.  In the front are two nice cauliflower plants, Burpee’s Summer Harvest, which are really healthy looking plants. The new leaves stay upright and look like they will shade the growing head really well.  The large plant is a Brussells Sprout.  A row of beans went into an empty space in this bed.  And that's nearly dead sugar snap peas on the trellis. 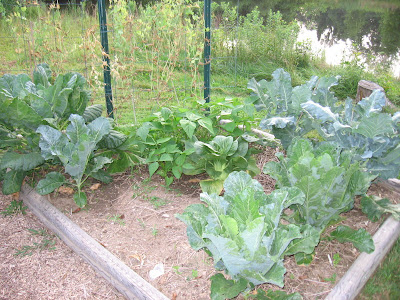 Also some beans,  three okra, red long of tropea onions and some wax peppers.  I tried some chard and, well, spinach it’s not.  It was a little bitter  And I caught a catfish this morning for dinner tonight.  Same size as the one in the last post.  For some reason the big cats are not biting, but they are in there.   Totals:
Potatoes  8 lb 12 oz;  Beans 1 lb 11 oz;  Okra 3 oz;  Summer squash 14 oz;
Peppers 4 oz;  Cabbage 13 oz;  Onions Red Long 5 oz;
Tomato German Queen 15 oz;  Tomato Brandywine 6 oz (green tomatoes);  Catfish 18 oz.
I made an Excel spreadsheet of the harvest totals after finding that the Google Docs spreadsheet did not have enough columns.  Not wanting to rant, but after using Excel for years in my job I've got to hand it to Microsoft for finding a way to ruin a great program.  Well done, Mr. Gates!  When I can figure out how Blogger adds a new tab I'll add a JPEG pic of the spreadsheet.  Seventy four pounds to date!
Posted by gardenvariety-hoosier at 6:44 PM

Those potatoes look beautiful. I can't wait for my potatoes to finish up, but I think I have quite a wait.

The squash plant looks like it has a lot of life left in it. Maybe the tidy up and spray with Bt will get it on its feet again soon. Of course, after it produced so much squash in such a short period, you might actually be tired enough of summer squash that you would not grieve excessively it if ultimately went down for good. LOL!

Those are some nice looking potatoes.

The more you stare at those tomatoes, the slower they'll ripen. =) I hope you get your first tastes soon!