We finally got a decent rainfall on Sunday – ¾ inch in the rainguage – which means I won’t have to water for several days.  Most guides recommend that vegetables get an inch of water a week, and it’s better to do this in one or two heavy waterings than a light watering every day.  That way the roots will go deeper since the soil generally dries from the top down.   Since I’m a science nerd I did some calculations to see how long it takes to put an inch of water on 250 square feet of bed space.   I measured the time to fill a gallon container – 10 seconds, or six gallons a minute.  An inch of water on 250 square feet is about 21 cubic feet of water, or 156 gallons. That works out to 26 minutes of watering to put down an inch of water.

It’s been a good year for broccoli.  Probably because I stopped growing the De Cicco variety and replaced it with Major.  I switched over to Gypsy for the summer maturing broccoli.   This is the first Gypsy brocolli and it did real well in the heat, but I don't think it is as good as the Major.  There’s one broccoli plant left but it looks like the heat is taking its toll.  Most of the cole crops have been showing some leaf burn.  I picked the last bok choi of the year this week.   Next year I'll definitely plant more broccoli and less kohlrabi. 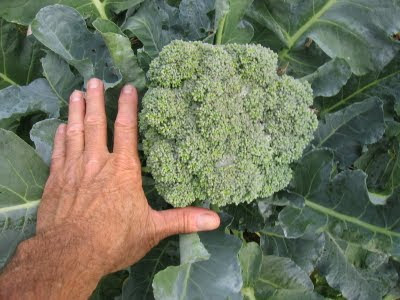 I’m not a big fan of carrots but grow a few.   In the past most were deformed and split.  This half-row of Danvers turned out real nice. 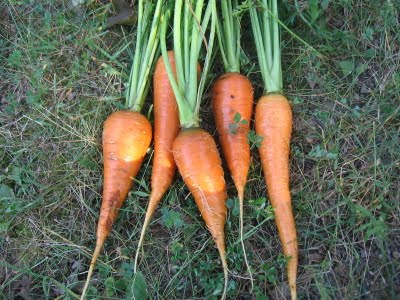 The peppers look like they are really going to produce soon.  That’s a red hot cherry in the foreground.  I’ve tried one - it’s like a sweet Jalapeno, slightly less hot. 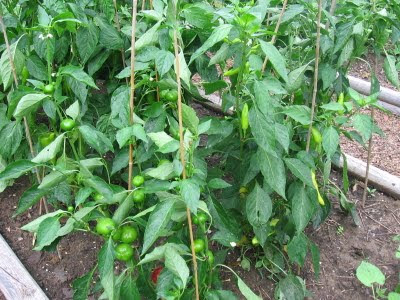 The Fairy Tale eggplant has a lot of small eggplants nearly ready to pick.  It’s really a striking plant.  I've picked a few slicing tomatoes from two plants - German Queen and Brandywine.  They are Bonnie plants from Lowes and I suspect that they are both the same variety - somebody must have switched tags at the store.  But they're tasty so no complaints. 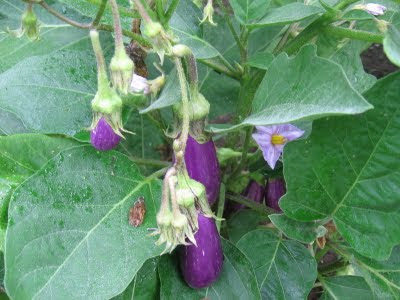 The Sunburst pattypan has gotten bacterial wilt, which has already killed the cukes and Acorn squash.  This morning the dead stems and leaves were covered in fungus.I’ve removed nearly all the old foliage and the new foliage looks like it has recovered some after the rains and cooler weather.  We’ll see how it holds up once the temperature returns to 90 degrees.   I’m not going to grow this variety next year.  Maybe it was bred to produce heavily for a few weeks and then expire, but that’s not the growth habit I want in a squash. 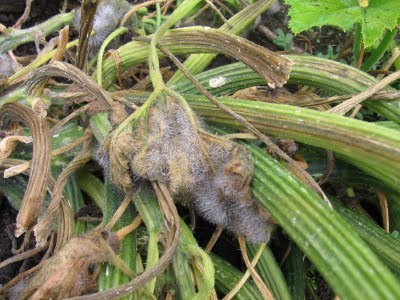 Totals for the week:
Snap beans 3 lb 15 oz;  Broccoli 1 lb 1oz;  Summer squash 9 oz;
Bok choi 15 oz;  Carrots 1 lb;  Tomatoes 1 lb 8 oz;  Peppers 9 oz
There’s a new tab with a spreadsheet of the harvest totals and plans.  I’m having a little problem converting the spreadsheet to a JPG format in the right size.  It’s more irritating because I got it right once and now can't repeat.  You have to click on the picture and then zoom in.  I'll have to retitle this blog  "The trials and tribulations of the computer illiterate bloggger".   85 pounds now!
Posted by gardenvariety-hoosier at 1:44 PM

I've never seen bacterial wilt...that stuff is really ugly! It looks like the stuff that sometiimes grows in the back of my fridge if I'm not paying attention!

That is a good looking head of broccoli! Well done! I get good broccoli production but it is a hohum sized head (regardless of variety it seems) but we get lots and lots of side shoot production that goes on for a long period of time.

Actual there are two pathogens on the squash. The bacterial wilt does just that - it progessively wilts the leaves. The fungus formed on the dead leaves and stems after we had the rain yesterday. If that plant makes it then I'll believe in miracles.

No rain down here, we could sure use some. Fairy Tale is such a pretty and tasty eggplant. It's one of my favorites.

It's truly been a bad year here for bacterial wilt too. All my yellow squash got it, and now my acorn has it too. So far the cucumbers and zucchini are ok, but we will see.

Other than the squash, things are looking good in your garden :)

Your peppers look so pretty. And your eggplant. Next year I'm going to grow an Asian variety again. I just love how they look.