I caught a catfish in the pond this morning and remembered to take a picture.  The catfish have been skittish lately.  After losing a nice one on Sunday I tried again on Monday and got nothing.  The equipment I was using was just all wrong, and unless a fish struck the bait the instant it hit the water it wasn’t likely that a fish would be hooked.  (For those of you who are interested, an open-face reel with cheap 20 lb line was combined with a spinning rod.  I could cast a bait about 15 feet before friction stopped it, then the cheap line would coil up and pull the bait in).


Monday I went to the sporting goods store and bought a rod and reel combo, some quality 12 lb monofilament line and the right-sized hooks.  Amazing!  I could cast a bait and bobber nearly across the pond, and the line was hardly visible.  Well the fish were still skittish so I abandoned the shores around the deck where they are fed and set up at the widest part of the pond, where the water is likely the deepest.  One cast and I hooked a really nice fish and began reeling it in.   Once hooked these fish tend to swim right toward shore in the direction they are pulled, then really put up a fight when they are in close to the shore.  That’s when I realized that the drag on the new reel had not been set.  I had no idea what the setting was.  This fish gave a good thrash near the shore and broke the line.  Lesson learned.
I walked to the other side of the deck and tried again.  After a few minutes a channel cat pulled the bobber under and I set the hook.  The drag was ready this time and the hook felt solid.  The fish was mine.  No it’s not a big fish, about 16 inches long, but big enough for a nice meal of pan-fried catfish.  And more fish guts for the compost bin. 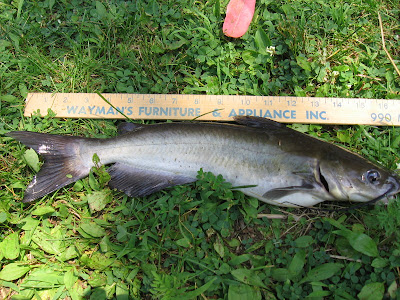 To me, channel cats have a physique more like a regular fish than most catfish.  They still have a wide flat head but overall they are more athletic than many other catfish species.  It’s amazing that these fish can learn to eat floating food since their eyesight is poor and they are not built for top-feeding.  They throw their heads back and forth to locate the food, probably using their barbels to zoom in on the food.
When some fresh sweet peppers, tomatoes, corn and potatoes are all available – not long now – I will make some Lousiana catfish chowder.  I’ll have to buy celery to make the trinity, since the celery I planted never made it.  There’s about six or seven meaty catfish backbones in the freezer already for the fish stock.
Posted by gardenvariety-hoosier at 4:17 PM

You got me in the mood to head out to the canal later today and try my luck! And I have the celery, onion and peppers right there in the garden just waiting! Wish me luck! Thanks for the post!

That looks like a nice fish. And catfish chowder sounds delicious.

Nice fish! Sounds like you had a good time. I've never heard of Louisiana catfish chowder. Maybe when you make it, you could do a post on it??? I'd be interested to see how to do it. I cook alot of stuff, but I'm not very good at any kind of fish stuff.
~~Lori

If you were not quite so very far away, I would bring you a mess of my beautiful celery in exchange for a bowl of that chowder!