The rabbit litter at 8 weeks

Almost 8 weeks.  The doe was bred on May 4 and delivered 10 kits on June 4, right on schedule.  They have grown into bright-eyed active little bunnies.  This was the litter three weeks ago.  They are happily munching on willow branches.  Willow grows on the banks of the pond levee.  The ramp takes them to an upstairs 'penthouse' where they like to sleep. 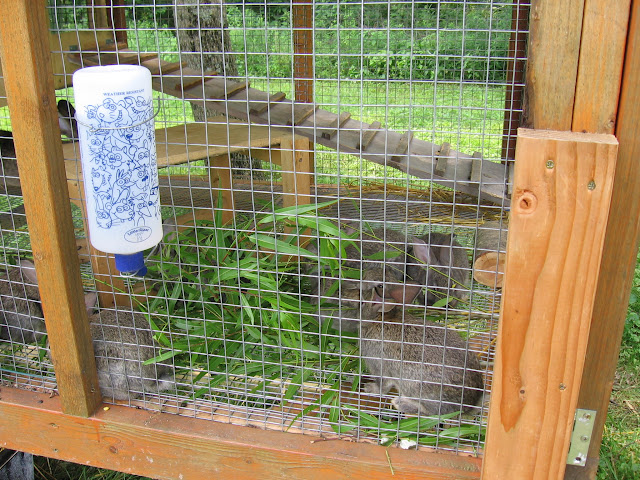 I feed them as many greens as I can find.  In the spring I fed the buck and the doe dandelion, plantain, and wild rose.  The wild rose bushes at the edge of the lawn are very large, and the first rose shoots are tender and the thorns are soft.  The rabbits love them.  Later in the spring they were fed the leaves from cole crops that were harvested.  A head of cabbage offers a lot of outer leaves that would otherwise go into the compost bin, same with kohlrabi, broccoli and caulifower.  Of all the green foods, the rabbits love brassica leaves more than anything.  A close second are the field peas that were grown as a cover crop in the squash bed.  For about a month the peas were cut and recut and given to the bunnies.  The garden is not producing much that they like right now, except when the pole bean vines are pruned, but willow shoots are abundant and they will eat them.  Earlier in the summer the rabbits got about half their nutritional needs met by greens, the other half from pellets, but the balance has tipped more toward the pellets at this time.  I'm hoping that as new cover crops get to size that the supply of greens will increase.

Now commercial rabbit pellets are supposed to have everything that the rabbit requires nutritionally, but the rabbits don't get excited about eating pellets.  Walk up to the pen with an armload of greens and they are running all over the place with excitement.  They enjoy eating real green food, they are very healthy, and it cuts down on feed expense.  Sounds like a win-win.

When I got into this I read a number of articles and books that cautioned against giving them greens.  They will give the rabbit diarrhea, gas, bloating, may even kill the bunny unless the rabbit is given several weeks for the gut bacteria to adjust.  The warnings were especially dire for baby rabbits just starting to eat solid food.  One of the premier books in the field warned against giving bunnies ANY green foods.

Well I never had a single problem with natural foods.  When I bought the breeding pair I introduced greens slowly over a few days, then just gave them all they wanted.  The bunnies got greens when the came out of the nest box.  There were no problems, none.  And, as I pointed out earlier, the rabbits love them.  I figure their life is pretty boring as it is, and the greens really gets them excited.

Here is a picture taken today, just after I threw an armload of willow branches into the pen: 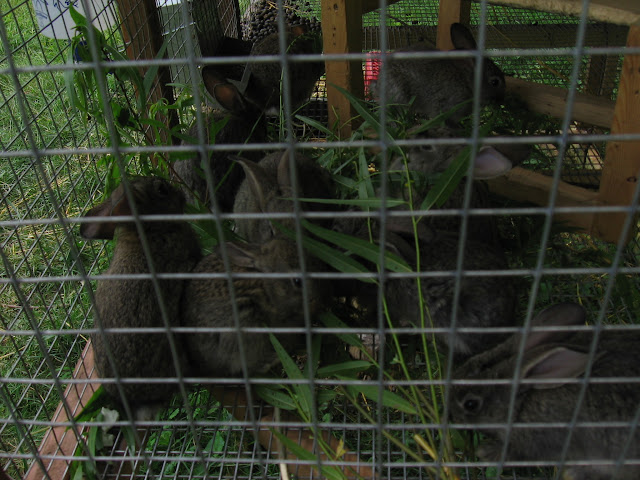 During the Great Depression many people kept rabbits in their backyards and fed them whatever scraps and greens they could find.  Pellets were unknown.  I'm sure the rabbits took several more weeks to reach slaughter weight but they found a way to survive without commercial pellets.  I'm not knocking pellets, they are reasonably priced and can be a real time-saver when there isn't time to forage.  The rabbits will probably be healthier and grow faster if they eat at least some pellets.  But their diet can be supplemented with natural foods with no ill effects, as long you don't mind if it takes a little longer for the bunnies to reach processing weight.  I'm not pushing my rabbits, there are no time constraints or a need to maximize production.  Since the doe was bred late this will be the only litter she has this year.  Next year I'll breed her earlier and try for two litters, but I have no desire to push for three litters, although a lot of people do that.

Here's the doe, seeking little quiet time away from her brood. 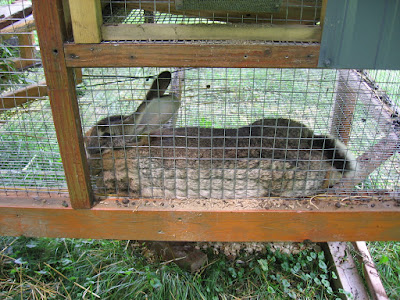 Posted by gardenvariety-hoosier at 5:28 PM

The business about "don't feed your rabbits real food" must be propaganda put around by manufacturers of rabbit pellets! In the wild, all rabbits would eat greens - its their natural food.

I laugh at the idea of not feeding rabbits greens. It is what they eat in the wild. Though I could see switching them over from a pellet diet to a greens diet could take a bit of time for the adjustment.