It's time to can the first (and probably last) batch of homemade salsa.  It looks like it has become an annual summer ritual that happens as soon as there are sufficient tomatoes and peppers for a batch.  Slicing tomatoes have been a near failure this year due to the wet weather.  At first I thought the tomato plants were infected with blight, but now I believe it is bacterial spot.  Blight starts at the tips of the oldest foliage and works its way up the plant.  If the plant is growing vigorously it can stay a step ahead.  This is different, the infection will show up anywhere on the plant and will destroy the flower stalks as well as the foliage.

Fortunately the Super San Marzano tomatoes were not affected until later in the season.  The plants are diseased now but a first bearing of tomatoes was unaffected. 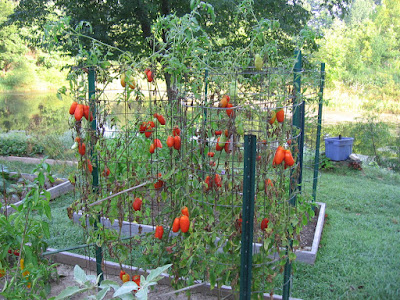 The other major component of salsa are the peppers.  I planted one jalapeno plant and a serrano plant.  Now this is where it gets tricky with raised beds and limited space.  I planted the hot peppers on the north side of the bed, assuming that they would be the tallest peppers.  In front of them I planted ancho and New Mexico peppers for chili powder.  This year I tried a new variety of ancho from Totally Tomatoes, Mosquetero hybrid ancho.  Turns out this is a very vigorous pepper plant, about five feet tall now, and shading the hot peppers much of the day, resulting in puny hot pepper plants.  The photo shows the many ancho peppers about half-sized on the plants.  Anyway, I had to buy some jalapenos from the store. 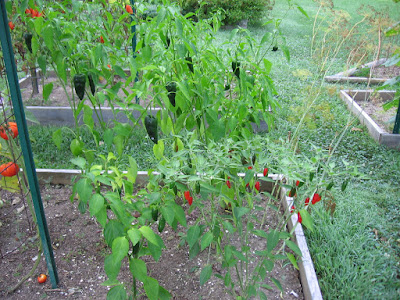 Then there are sweet peppers, which I like to grill, de-skin and add to the tomato base.  I picked these two Mama Mia Gallo sweet peppers.  They and another one in the refrigerator were put on the grill and processed into the salsa.  This pepper has great flavor, small amount of seeds, really like it. 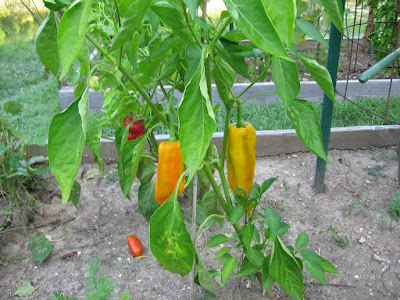 In addition the salsa got two Tropea onions, a handful of chopped parsley and 5 ounces of fresh lime juice for acidity.  There were about 7 1/2 pounds of paste tomatoes.  I was trying for enough salsa to fill 7 pint jars, which is the capacity of the canner.  There was enough for 6 1/2 pints, so the half jar was set aside for the refrigerator and a 'dummy' jar set in the center of the canner. 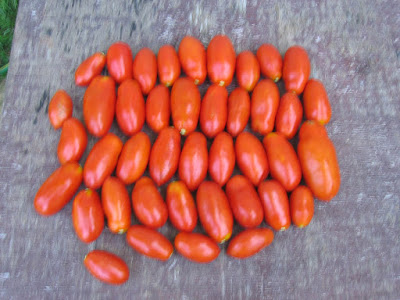 Canning salsa is a lot of work.  Slipping the skins off the tomatoes, roasting the peppers and cutting the hot peppers and onions to a fine chop takes a lot of time.  It makes those bottles of salsa in the supermarket look like they are well worth four or five dollars.
Posted by gardenvariety-hoosier at 4:24 PM

Too bad about the peppers being shaded, but wow, those are beautiful paste tomatoes. I usually end up buying tomatoes for my salsa, but can generally scrounge up the rest of the ingredients from my garden oh, except for cilantro which always bolts on me so I buy that too. I'm thinking about making it soon. I don't peel my tomatoes, I just pulse them in the food processor (but I'm lazy).

Your salsa sounds delicious - my tomatoes are just starting to step up a bit, so canning season isn't too far off. The same thing with the accidental shading happened to me with my fava plants - I didn't realize my "short" variety would get as tall as it did and they completely shaded the bush beans beside them. Now we both know for next year!

Roasted peppers in salsa sounds wonderful, but a lot of work when added to the boiling and peeling of tomatoes.

The rain has definitely been awful this year and it really affected the tomatoes. But I keep telling myself, at least the cucumbers did really well this year.

Too bad about your tomatoes. It has definitely been cloudy and humid here and lots of fungal problems. My peppers got bacterial spot but a couple of sprayings with copper and Actinovate and some leaf removal and they have recovered. I sprayed the tomatoes while I was at it, so that helped a little.