I've never ripped out tomato plants in August, so this is a first.  The bacterial spot/blight that got into the plants during the rainy cool weather in early summer had gone too far.  I didn't want the plants to serve as incubators of nasty microbes.  A picture of the two cages of slicing tomatoes shows almost no foliage left.  I did manage to pick a few slicers before taking them down. 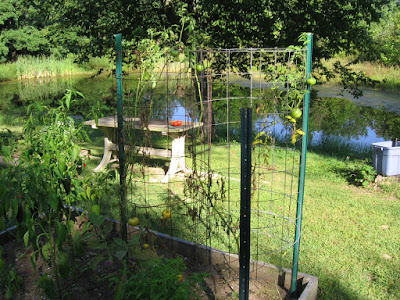 The Super San Marzano tomatoes developed a lot more foliage before they got infected, now most of their leaves are brown and they were also pulled up.  Since the weather improved all of the tomato plants started new shoots which show no sign of disease, but those shoots start at the top of the cages and are too spindly to produce any amount of fruit.  Before taking down the tomatoes and their cages I harvested about 3 1/2 pounds of tomatoes, mostly sauce tomatoes.  The beds look empty now, just peppers and sick looking eggplant. 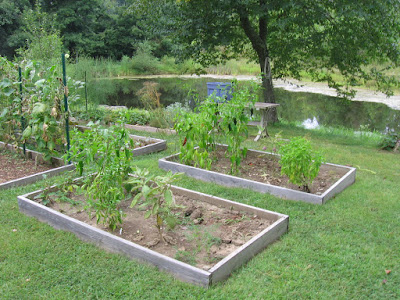 I sowed Berseem clover in the former brassica bed about 6 weeks ago.  Most of it died. 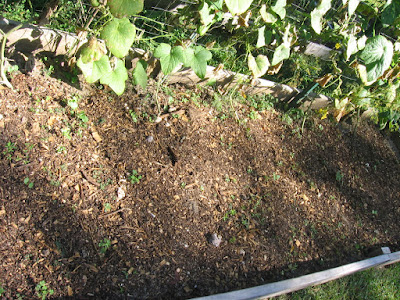 So in the former onion/garlic bed I sowed buckwheat as a cover crop.  It's doing better than the clover. 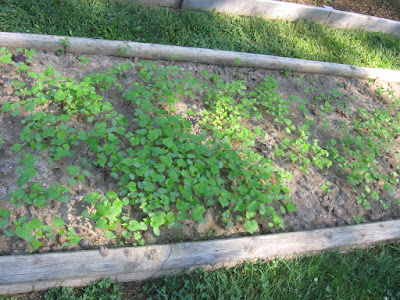 Crabgrass had taken over the squash bed.  I was hoping the squash would shade out the weeds, but the Teksukabotu plants have succumbed to a fungus and lost most of their foliage, giving the weeds an opening. 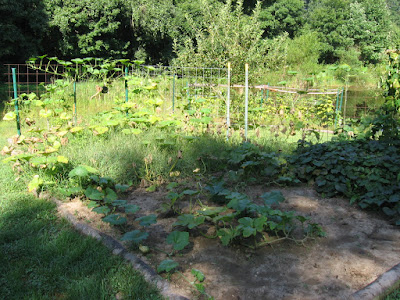 Well I got in their and ripped out as much as I could.  At least I can see the squash now.  The vines growing on the trellis are relatively free of fungus.  That shows the benefits of air exposure in preventing fungal infestations. 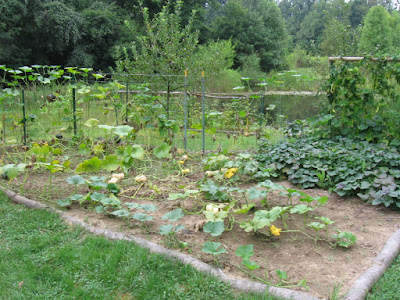 At least the okra are doing well, and the beans are producing again.  This is Millionaire okra, from Johnny's. 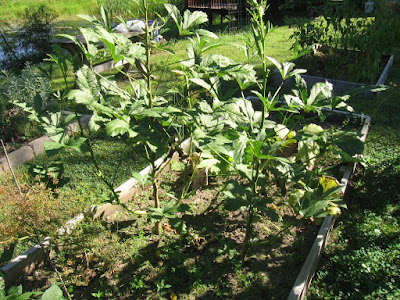 Posted by gardenvariety-hoosier at 5:55 PM

That's too bad about the tomatoes. I have one plant, a Costoluto Genovese, that is a goner - I'm just waiting for a couple more tomatoes to get a bit of a blush so that I can harvest them and yank the plant. So far, early blight has slowed down a bit on the rest of the plants - I think our recent dry, hot weather has done them some good. Your eggplant is looking like mine as well - especially my Slim Jim. Hopefully I get one or two eggplant harvested before it's toast.

Blight has arrived in my garden now, so I have been defoliating the tomatoes to retard the growth of the fungus - probably a vain hope! Some of my tomatoes are allegedly blight-resistant ones (Ferline, Primabella, Primavera, Crimson Crush), so maybe they will survive?

My squash is seeing some fungal diseases now too. I had to do a major revamp of my zucchini plants, cutting out a lot of dying foliage. And the winter squash is just starting to get powdery mildew. But not too badly yet.