The pole beans have started to produce again.  I got very few beans from late July until now and last week I could see that they had set quite a few blossoms, so here they are.  Fortunately a row of Provider snap beans picked up much of the slack in the interim.  These are Fortex and Marengo Romano.  I picked just over two pounds for the week. 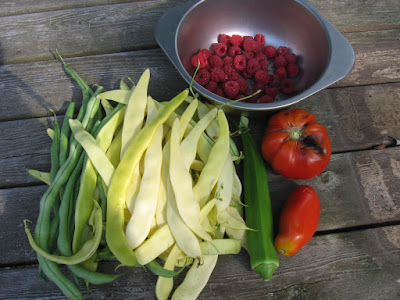 Okra is producing well too, a pound this week, as the plants have established themselves. I have two Millionaire okra plants, a recent F1 hybrid, and two Silver Queen plants, an heirloom okra.  The Calypso cucumbers gave me six more pounds but it looks like they are slowing down as the plants are showing some fungal problems.  Doesn't matter, the rest of them go to the rabbits as I've pickled all I'm going to pickle.

This year the tomatoes are a disaster.  I think they have bacterial spot and the plants are nearly finished. There are a few more slicers to pick and probably several pounds of Super San Marzano that can be made into salsa.  Then I'll pull up the plants and burn them.  The eggplant hasn't done well either.  They just did not like that cool cloudy weather early in the summer.

To see what other people are growing, link to http://daphnesdandelions.blogspot.com/


Posted by gardenvariety-hoosier at 5:32 PM

Oh, those raspberries look delicious! I'm not sure I even harvested 6 pounds of cucumbers this season, or at least if feels as if I haven't. My cucumbers are basically toast with the powdery mildew that has taken over quicker than I can say pickles. I'll be pulling them down this week...and hoping for a better season next year.

Us too with the tomatoes and eggplant, for the same reason. A strange year. Nice harvests anyway.

It must have been hot there if it was too hot for the beans. At least they are producing now.

Your yellow beans look a lot better than mine. I have grown several varieties of yellow beans, but they never seem to do well - in any case, I prefer the Runners. My tomatoes are not too bad either. We have so far escaped the blight that so often afflicts them. "Win some, lose some" eh?