Biggest harvest so far this year.  That's no surprise, I dug up the potatoes last weekend and got 45 pounds of spuds.   The pole beans have slowed down to almost nothing, so I'm getting beans from a single row of Provider bush beans for now.  The Calypso pickling cucumbers again outdid themselves, but it looks like they too are slowing down.  That's fine with me, I've canned 35 pints of dill pickles and don't want to can any more.   The summer squash and Diva cucumbers are also producing well. 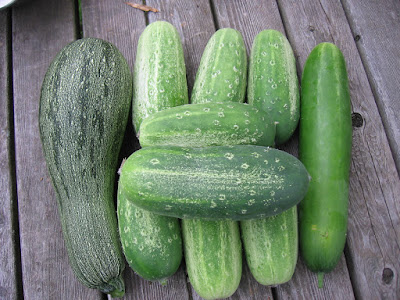 The okra plants finally produced enough in one picking to make a quart of okra pickles with Serrano peppers. 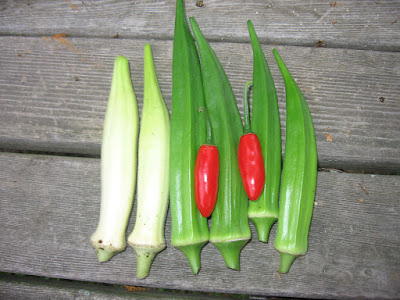 More Calypso's, some beans, and a few strawberries.  The strawberries have been small and many are lost to birds or insects. 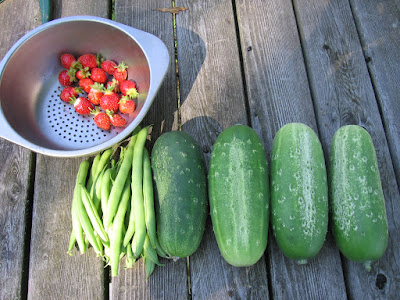 On Sunday I got a nice harvest.  That's a Grandma's Pick tomato in the foreground. 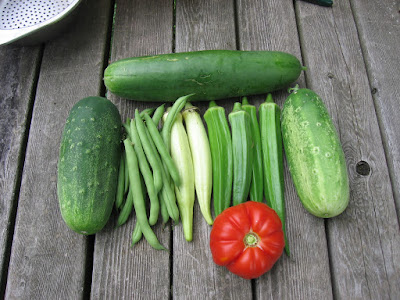 Now over 200 pounds for the year, with the star producer being the five cucumber plants at 62 pounds.  In second place, the potatoes - 32 pounds of Red Pontiac and 12.5 pounds of Kennebec.  To see what other people are growing, head on over to http://daphnesdandelions.blogspot.com/ 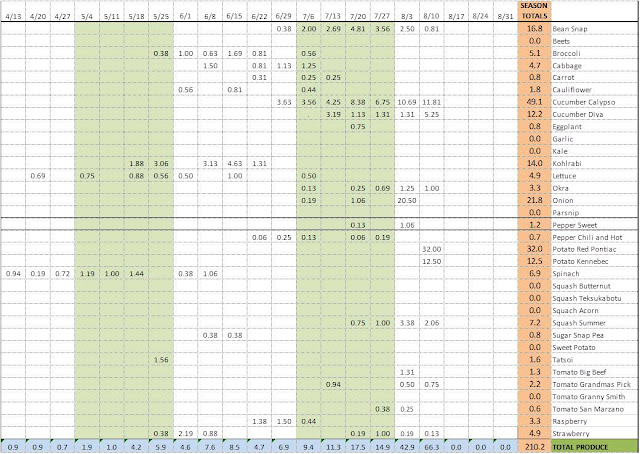 Posted by gardenvariety-hoosier at 4:29 PM

You have to be the cucumber growing champ this year. 62 pounds from 5 plants. Calypso is on my list for next year for sure. And nice potato harvest.

I agree with David! I'm impressed with your Calypso cucumbers. I definitely want to give those a try. Your potato harvest is awesome too. They ought to keep you well fed for months.

Wow - I definitely have more than 5 cucumber plants and I don't think I've even hit 4 pounds yet. For some reason, my cucumbers aren't doing that well this year compared to last - not sure if its the bed they are in or what. Those are a lot of potatoes - do both of those varieties store well? We really love potatoes around here & I'm growing a few that are supposed to be good in storage, but I won't know until I test that out this winter. It would be nice to add potatoes to the list of food we don't have to shop for anymore.

As everyone else has said - Wow to the Calypso cucumber. That's incredible! You could sell them to a store and till have plenty for yourself :)

What a great cucumber harvest. Last year I hit 60 pounds of cukes. I'm so glad to have less this year. But I could use a few more than I got. I'm never satisfied I guess. Though if I could have succeeded in all my fermentation attempts I think it would have been enough cucumbers, but no I just have one two quart jar of pickles. I'd like two of them.

OK I don't want Calypso - I could not imagine what I would do with that many cukes!! But I sure would like your spuds ...