A reflector for the light setup

Like a lot of gardeners I start most of the plants for the garden indoors.   The lighting system began as a 2-flourescent tube shoplight suspended from the ceiling,  with plants in trays on a folding table beneath. The system evolved to a four shelf rack with a 4-tube light suspended from the top shelf.  More lights can be added to lower shelves although I haven't needed a second light setup yet.   A mobile coldframe is an integral part of the system, as seedlings can be moved out to the coldframe as they get larger, making room for new starts indoors.

It always bothered me to see that a lot of light was wasted out the sides.  When I set the lights up this year I fastened a wood crosspiece on the back side of the rack and stapled a piece of Reflectix to it.  This stuff is like silvered bubble wrap.  It has a reflective coating on both sides and a dead air space in between. Setting up the reflector at an angle helped put more light on the plants, as opposed to the vertical placement it had last year. 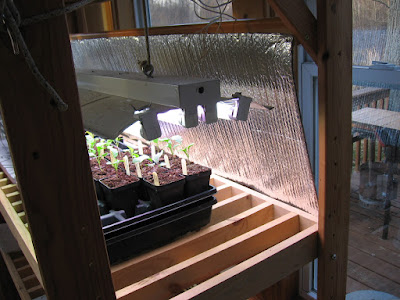 I did not consider doing this on the front because I wanted easy access to the plants.  What was needed was a reflector that could be inserted or removed easily.   I was thinking of using a piece of plywood with Reflectix stapled on it, a heavy cumbersome setup.   Then it came to me - use a piece of foam insulation board.  It's strong, rigid and light.  I had a piece of foam in the pole barn from the kitchen remodel, when a hole was cut in the wall for a window.  (This is why I never throw anything away). 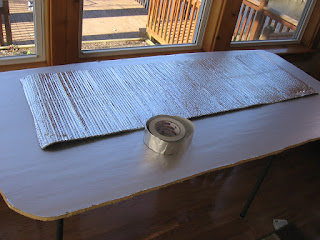 Here you see a piece of foam, a piece of Reflectix, and aluminum tape that is used for sealing the joints in ductwork.  This tape is a bit pricey, and duct tape will probably work fine, but I had a partial roll of this from a prior job, so I used it.  After taking some measurements the foam was cut to size and the Reflectix was taped onto the foam. 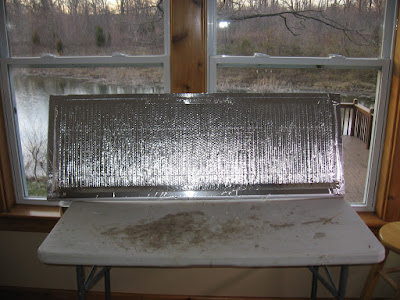 The reflector took about 15 minutes to make.  It's light enough to lean against the suspended light unit and can be removed with one hand (the movable reflector is on the left in the picture).  With reflectors on each side I believe the light unit can be raised to full height with little loss of illumination.  With taller seedlings like tomatoes the reflectors should help get light to the lower leaves.  Another benefit: if the space is needed the trays can be turned crossways and still get adequate light.  Why didn't I think of this years ago? 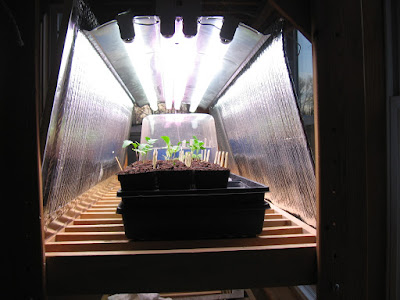 The foam doesn't look that great, but it has another benefit.  I like to work on the computer in the sunroom.  Now I don't have to look directly into the lights when I look up. Posted by gardenvariety-hoosier at 9:55 PM

What a great idea - my setup could definite use a bit of help keeping the light in. I see that I can purchase Reflectix at our local Home Depot so am adding it to my shopping list.