It's not like I have any say in this, but after 3 days of temperatures that would be below average in January, it looks (knock on wood) like the weather is finally on the upswing into spring.  It looked like that several weeks ago, when I was raking leaves off the flower beds and the strawberry bed and doing other spring-like work that I normally do when I'm sure that winter is over.  But it wasn't, not by a long shot.  Three mornings below 20 F - Thursday morning the low was 16 F - and most of the exposed strawberries were killed.  The pond had a thin sheen of ice over it.

Beginning Thursday the 10 day weather forecast looked more promising, with more seasonal weather in the forecast.  I was ready to garden Thursday morning, chomping at the bit as the saying goes.  The seedlings under the lights indoors were crowding each other badly, shading the seedlings that had just germinated.   I wanted to at least remove the lettuce to the mobile coldframe.

The Earthbox was prepared indoors that morning.  A self-watering container has a reservoir to hold water, some sort of platform to hold the growing medium above the reservoir, and 'plugs' - openings in the platform where the medium can contact the water in the reservoir and wick it into the medium.  I insert plastic pots, which have a few slits in the sides, into the openings to slow the wicking process.  Without these I've found that the water is taken up too quickly and will saturate the potting mix. 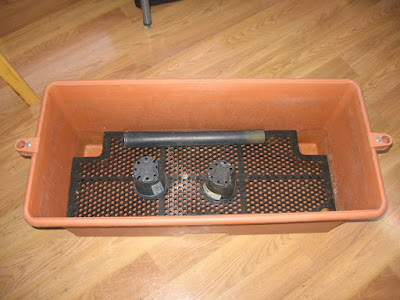 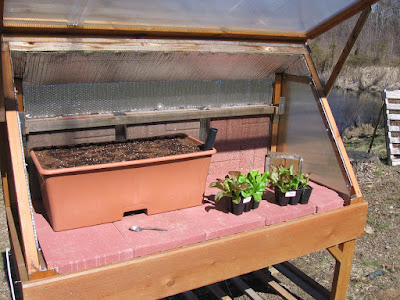 The lettuce was transplanted to its new home.  Lettuce in containers is much cleaner than lettuce grown on the ground.  I usually get about 5 pounds of lettuce from a self-watering container, which is very productive.  Some of it is cut and allowed to regrow, while the bibb lettuce is removed as a head then replaced.  This year I plan to move the containers to the new ledge once the weather turns warm, where it will get afternoon shade.  I'm hoping this will extend the season somewhat. 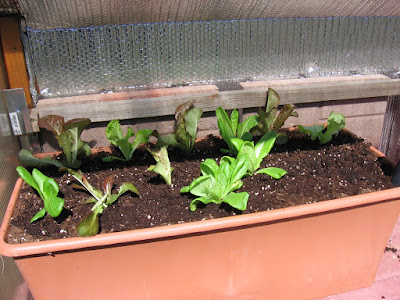 After transplanting the lettuce it was time to prepare some beds.  An earlier post showed the large bed after a cover of leaves was burned to kill the weeds. The surface of the bed was a mix of dead plants and char.  I decided against spading over the bed, a lot of heavy work with no obvious benefits, and opted to run the little tiller/cultivator at a shallow setting to break up the surface.  This is the beast here: 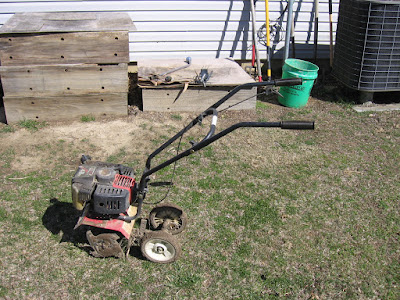 It did not take long with the tiller, as all I was trying to do was break up the surface for seeding with a cover crop of field peas.  That will have to wait a few days since the soil was quite cold and a little frozen in places.  One edge will be planted in sugar snap peas, and that will also wait until the soil warms a little. 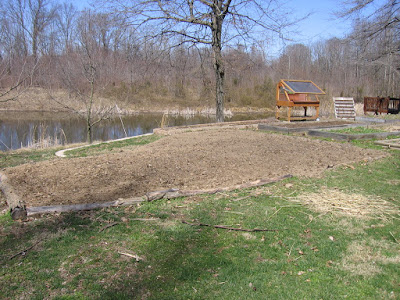 After prepping the squash bed it was off to this year's brassica bed.  The first set of brassicas growing indoors are ready to go out anytime, but the soil needs to warm a little.  This bed was turned over with a shovel.  Mostly the weed cover was chickweed, which was either buried or removed.  There was no need to run the power tiller in this bed since the soil broke easily to the hoe.  After amending these beds for years with compost, they finally have sufficient tilth to break up easily with simple hoeing.  Satisfaction! 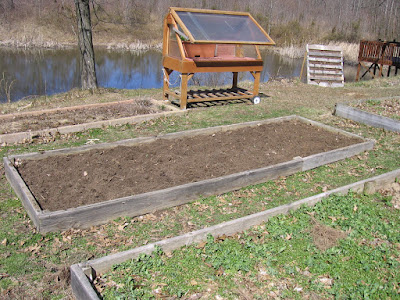 The door of the coldframe is propped open to prevent overheating.  On a sunny day such as yesterday, the temperature inside can climb well over 100 F if the door is shut.  There is a temperature sensor inside the coldframe that keeps me updated when I'm in the house.  Today is overcast and the door is closed.

I plan to move the tray of onions into the coldframe on Sunday.  That will make room under the lights to plant more seeds - peppers and another set of brassicas.  After an unexpected reprise of winter, things are moving along again.
Posted by gardenvariety-hoosier at 11:35 AM

The weather is just too unpredictable these days. I'm supposed to removed the straw covering from the beds but we are under a few inches of snow right now. Those beds look great - it's a wonderful feeling when all that lovely compost, etc., pays off with beautiful, easy to work with, crumbly soil.

You are getting a lot done in the garden and your lettuce seedlings look nice and big. Tomorrow is supposed to be in the 70's for us, fingers crossed. I'll be starting the garden cleanup but it's probably too wet to work the soil.