Another day's toil, and it's getting there

Continuing the theme of what's involved in getting the vegetable garden ready for another season, here is another post on spring preparations.

I still haven't planted the rhubarb.  Having spread the usable compost on the squash bed, there was none left to amend the soil around the rhubarb planting, and I have read that you must be sure that the soil that rhubarb is planted in has lots of organic matter.  I'll have to buy a bag of compost.

Before the rhubarb can be planted, the Tribute strawberries had to come out.  I decided not to transplant them to the pallet planter.  I'll purchase June-bearing strawberries for that.   The plants had been damaged heavily by the late cold snap, since I had raked the leaves off of them several weeks ago.  After hoeing out the strawberries, the bed was smoothed over.  The end of the bed that has asparagus was covered with a layer of mulch. 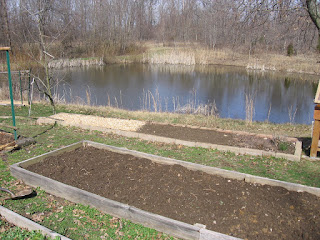 The rhubarb will go in the center.   I plan to add some more herbs at the end opposite the asparagus.  Anise hyssop for its bee-attracting qualities, and something else.

Two beds need to be ready in a week or so.  A few days ago I spaded over this years brassica bed, and today I spaded over the adjacent bed that will get onions, carrots, beets and maybe parsnip.  First I raked off the cover of field peas and volunteer chickweed that survived the winter.  Most of it came up like a carpet. 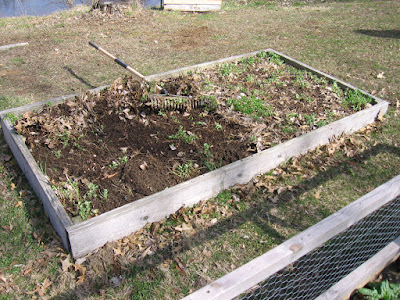 After removing what I could with the rake, the bed was spaded under.  Since this bed will be planted in small seeds and onions, it needs to be in a fine tilth.  The shovel was pushed in as far as it would go before turning the shovelfull over.  I was surprised at the amount of tree roots in this bed, which have to be dug up every year.  It was rough going, as every time the spade was plunged in it had to be levered up with difficulty to break the roots.   A large cherry tree about twelve feet from the bed was removed about five years ago, and there's no way it was the culprit. 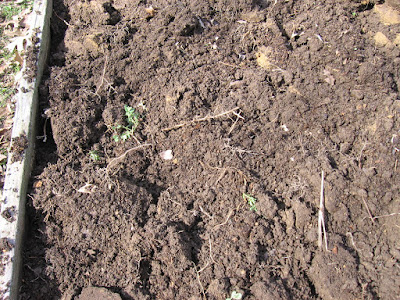 That leaves the hop hornbeam tree over 20 feet from the bed.  Also known as ironwood for it's gray bark that has a metallic look, it's a small understory tree that has grown very slowly.   I can't imagine that this tree would spread its roots far beyond it's canopy, but I can't think of anything else that would send its roots here. 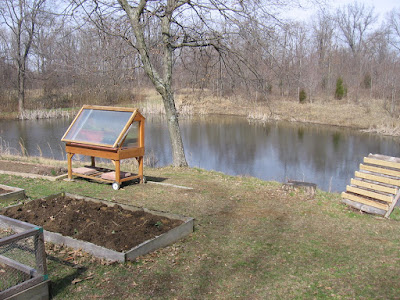 The tree is certainly not coming out.  I'm fond of this little tree with it's ungraceful limbs, so I'll resign myself to digging up roots every spring.

I'll go over this bed with the little power tiller, and it will get the onions in about a week, with a planting of carrots about the same time.   The first set of cole crops is in the cold frame ready for transplanting into the big bad world.  Tonight and tomorrow night frost is predicted, so I'll wait two more days to set them out.
Posted by gardenvariety-hoosier at 5:26 PM

I'm having more tree issues this year as well, in my case a couple of spruce. We've decided to transplant them to a new location where we need to add trees - it's expensive, but in the end, it would cost more or less the same as removing them and purchasing/planting new (and significantly smaller) trees.