After several cool cloudy days we had another nice spring day, and that brought a long day of work in the garden beds.  'Make hay while the sun shines' as the saying goes, and that I did.  With no frost likely for days, the 72 cell tray of onions was moved into the coldrame.  That left room under the lights to start peppers.  I started two Mosquitero anchos, three Bastan anchos, and two Magyar paprika peppers, dropping two seeds in each pot.  I buy the remaining peppers as seedlings from May's Greenhouse in Bloomington.  They offer about 60 different varieties of peppers seedlings and I can usually find the kinds of peppers that I want there at a dollar a plant.

Field peas were inoculated in a slurry of nitrogen-fixing bacteria and scattered over the large bed.   After the seeds were scattered the bed was covered with a thin layer of compost from the bins.  The compost gives the peas enough protection to germinate. 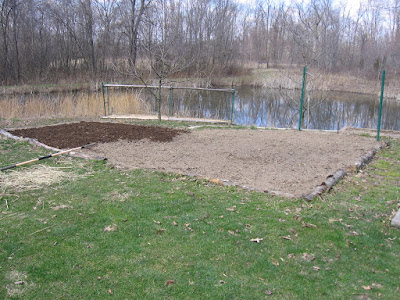 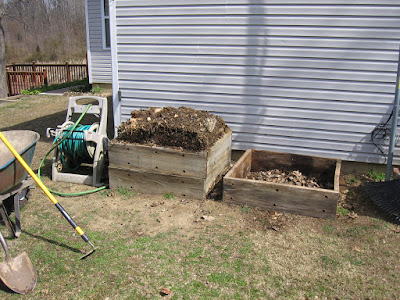 I got enough good stuff out of the bins to cover the bed.  When I was finished spreading compost there was a two module bin with 'green' compost that's still working, and an empty two module bin.  Kitchen scraps and bunny poop will go into the empty bin while the full bin is left to finish out.  I'm hoping this compost will be sufficiently ready in two months to add to the beds that get hot weather plants. 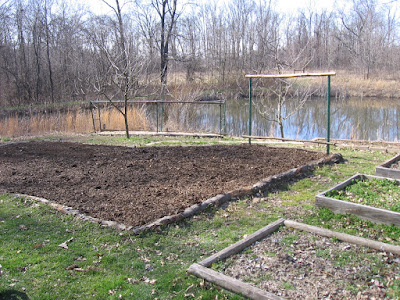 A row of sugar snap peas was seeded along one edge.  I drove in two fence posts and attached cross pieces top and bottom, but never got around to tying some strings to the cross pieces.  I'll have to hunt down some plastic and see if I can rig up a makeshift cloche to help warm the soil over the sugar snaps to speed up germination.

Then there's the pallet that I made into a strawberry planter last fall.  One plant made it through the winter.  That's not surprising as I did nothing to protect them.  I had to choose between scrapping the thing or trying to improve it.  It seemed like less work to improve it, and I really like strawberries.

I cut triangles from 2 x 4's on the miter saw and screwed them to the sides of the pallet, then 1 x 4 pieces were fastened to the triangles to make six pots.  The pallet was leaned at a greater angle and rebraced.  Potting mix was added.  I'm thinking this might actually work.  The growing medium in each individual tray connects with the mix that fills the pallet, so the roots have plenty of room to roam.  It's also much easier to water. 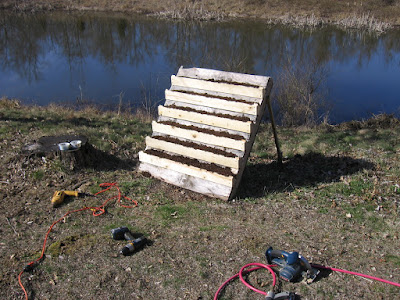 Now I'm trying to decide whether to take out the everbearing strawberries in the bed - they have to come out anyway - and transplant them to the planter, or should I buy June-bearing strawberries?  I've found the everbearers really don't do much after the first flush of berries, and the birds get most of them anyway.  And people say that June-bearers taste better.  Which people, I don't know.

After the strawberries are dug out of the bed they will be replaced with rhubarb.  Yes, rhubarb.  Good stuff, makes any berry or fruit taste better.   And I like the looks of it, big leaves and red stems.  The first set of brassicas needs to go out into the bed ASAP.  It has to wait, as storms are predicted tomorrow.  Progress may be slow but progress or something like it is underway.
Posted by gardenvariety-hoosier at 11:23 PM

That'll be nice having both rhubarb and strawberries, and the new strawberry planter looks like it'll work great.

How wonderful to spend an entire day in the garden. It seems that every year, the start to the season is a bit slow, but then it's full speed ahead and I can't keep up.

That strawberry pallet is ingenious - it will be interesting to see it bursting with strawberries this summer.