This year's brassica bed was planted with the first set of cole crops about a week ago.  It always feels good to get that first set in the ground, as if the season is really beginning.  I put the bunny protector on the bed just in case.  Now if only we'd get more sunlight, these plants would grow a little faster. 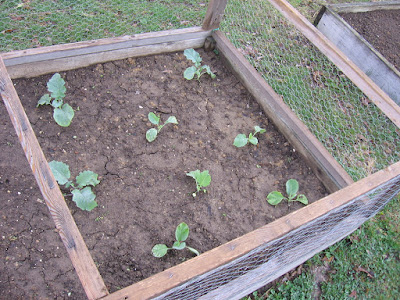 The first set of brassicas is often hit or miss, and frequently the second set that is started two weeks later will produce before the first set.  With the mild weather it looks like this planting is off to a good start.  There's broccoli, kohlrabi, cauliflower and cabbage in the mix.

Another bed is also prepped and ready for seedlings.  It will get onions to start, then carrots and beets a bit later.  I'll set up a trellis on the back (north) side of the bed for cucumbers so I'll have to leave a little room for them.  The onion seedlings have been biding their time in the coldframe, and they are just about large enough for transplanting.  It looks like about 60 seedlings out of a 72 cell tray have survived.  They will go in the beds after the next round of rains go through and the soil in the beds dries out a bit. 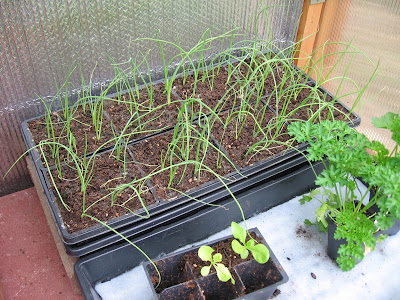 I've found that onion seedlings tend to get straggly under the lights, so I try to get them into the coldframe as soon as possible.  They have become stockier growing in sunlight.

One more bed still needs prepping for spring plantings.  It will get parsnips and the last sets of brassicas, as well as a row or two of bush beans to give me early beans.  What's left is the bed for tomatoes and peppers, which has a cover crop of field peas on it right now.  I won't do anything with it until May.

What I call the 'greenhouse bed' for overwintered plants is looking great.  The spinach has never looked better at this time of year, especially the row of Reflect spinach.  I've gotten a couple of small pickings so far, but expect to bring in much larger hauls very soon.  The lettuce - Pinetree winter mix - was looking very nice until the harsh cold snap in mid-March.  It looks like it is recovering.  There's a row of bunching onion and a row of spring planted spinach, which is hard to see in the photo, that is coming up nicely now, and at the other end,  four rows of garlic. 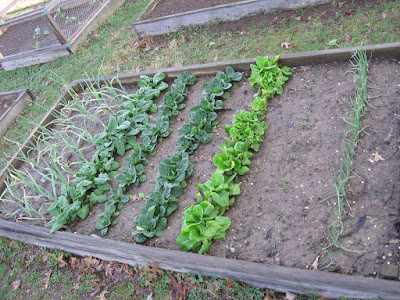 If everything works according to plan, all of this will be out by June, excepting garlic, and will be replaced by a summer squash plant and some okra.

The everbearing strawberries were pulled out of the perennial bed.  I put in a Victoria rhubarb plant, after first digging a large hole and amending it with compost.  After allowing for the rhubarb to get larger that still leaves some additional room.  I'll put in some more herbs to fill the space.  The section planted in asparagus was mulched with wood chips. 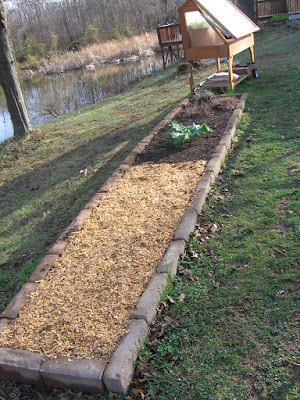 I was going to plant a rhubarb crown but after removing it from the bag and seeing it was not encouraged, in fact wasn't sure it was alive.  Last weekend I stopped at May's Greenhouse in Bloomington and saw they had nice healthy rhubarb plants in the pots, actually all their stuff is amazingly vigorous.  Decided I couldn't wait to see if a crown was going to make a plant when a real plant was available for eight bucks. 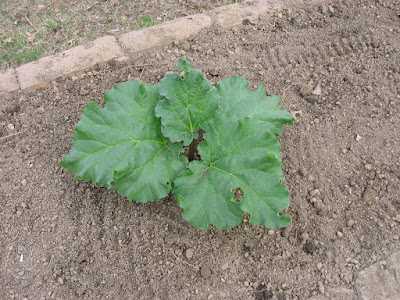 Seedlings are coming along.  After ten days, the first peppers finally - finally- germinated.  Peppers take forever, that's why I'm more than happy to buy most of them as seedlings at May's.  I started the peppers with a heat mat under the trays, since at the time their wasn't room for my preferred method until some of the seedings could be moved out to the cold frame.  The heat mat is really pointless since I use a two tray system with a reservoir and wicking mat, and the heat never gets up to the top of the pots.  What does work is the plastic domes that trap enough of the light via the greenhouse effect to warm up the atmosphere inside of the dome.  They also keep the surface of the potting mix moist. 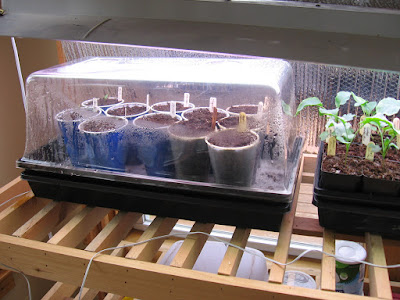 There's a temperature sensor inside that shows the dome maintains a temperature between 76 and 80F when the lights are on.  That's close to optimal to get peppers and eggplant to germinate.
Posted by gardenvariety-hoosier at 10:40 PM

Your greenhouse bed looks amazing! I know what you mean about those 1st outdoor plantings - it's a great feeling. So far, not much happening outside on our end but I did get some plastic on a few beds to warm them up for the peas and favas...only a couple more weeks and I'll be digging in the dirt too :)

Your overwintered plants are looking great and your brassica seedlings seem big and healthy. I've been antsy to get out in the garden, but its been raining off and on the last couple of weeks. Your little greenhouse cover has worked very well for your spinach and lettuce.